The technical interview practice gap, and how it keeps underrepresented groups out of software engineering

MIT gave me was a big stamp on my forehead that, to this day, makes strangers think I’m smart. But there was another, more relevant gift that gave me a serious advantage over students who did not attend an elite computer science institution: boundless access to technical interview practice. Not only was there a multi-week course during the month-long break between Fall and Spring semesters that was dedicated exclusively to passing technical interviews, but all of my peers were going through exactly the same thing at the same time

“Well, it seems great to me”

But if your music, your graphic design, your website–whatever your work is–isn’t resonating with the market, it might be because you forgot to make it for them.

The malign influence of the regime in China, the world’s most populous dictatorship, was especially profound in 2020. Beijing ramped up its global disinformation and censorship campaign to counter the fallout from its cover-up of the initial coronavirus outbreak, which severely hampered a rapid global response in the pandemic’s early days. Its efforts also featured increased meddling in the domestic political discourse of foreign democracies, transnational extensions of rights abuses common in mainland China, and the demolition of Hong Kong’s liberties and legal autonomy.

The Wasting of the Evangelical Mind

Evangelicalism in America, however, has come to be defined by its anti-intellectualism. The style of the most popular and influential pastors tend to correlate with shallowness: charisma trumps expertise; scientific authority is often viewed with suspicion. So it is of little surprise that American evangelicals have become vulnerable to demagoguery and misinformation.

Food Prices Are Soaring Faster Than Inflation and Incomes

Developed markets tend to be insulated from short-term price spikes, because food is more processed and the food chain is more elaborate. In the process of turning a bushel of corn into a bag of Tostitos, food companies have a lot of room to absorb incremental costs, said David Ubilava, a senior lecturer at the University of Sydney who specializes in agricultural economics. But when costs stay high for a sustained period of time, companies start thinking about how to pass them on.

‘I’ve Never Seen Anything Like This’: Chaos Strikes Global Shipping

“Everybody wants everything,” said Akhil Nair, vice president of global carrier management at SEKO Logistics in Hong Kong. “The infrastructure can’t keep up.”

Heat pumps have been around for decades, but they didn’t used to be very efficient, especially in extremely cold weather. That’s changing. Now some cold-climate heat pumps can transfer heat effectively in subzero temperatures. An oil- or gas-fueled furnace (or other backup heat sources) might be required on the coldest days, but on all the others, your heat can be electric.

The Algebra of Wealth | No Mercy / No Malice

Successful people often unwittingly head fake young people with the humblebrags of “follow your passion” and “don’t think about money.” This is (mostly) bullshit. Achieving economic security requires hard work, talent, and a tremendous amount of focus on . . . money. Yes, some people’s genius will be a tsunami that overwhelms a lack of focus and discipline. Assume you are not that person.

The Unstoppable Momentum of Outdated Science

In 2020, climate research finds itself in a similar situation to that of breast cancer research in 2007. Evidence indicates the scenarios of the future to 2100 that are at the focus of much of climate research have already diverged from the real world and thus offer a poor basis for projecting policy-relevant variables like economic growth and carbon dioxide emissions. A course-correction is needed.

Transplant an organ? Why not an entire body?

A Russian physiologist named Vladimir Demikhov — who operated without benefit of an MD or a PhD — gave the Soviets an early lead in this “inner space race.” Film footage that leaked to the West in 1958 showed Demikhov ostensibly splicing together a mastiff and a much smaller dog to create a composite animal with eight legs and two fully functional heads. (Schillace, always alert to the queasy but alluring strangeness of her material, playfully notes that this “canine jigsaw” was named Cerberus, “after the three-headed hound of Hades.”)

Are We Raising Unhelpful, Bossy Kids? Here’s The Fix

many moms told Alcala that they don’t let young children and toddlers help around the house. “What they say is that, ‘I know she’s not going to do a competent job, and she’s going to create more work for me,'” Alcala says. “So the parents exclude the child from helping because they’re not competent yet.” (That’s exactly what I was doing with Rosy.) But Alcala and other psychologists say this shooing away — or excluding kids from helping — can have negative consequences. Over time, it may erode a child’s motivation to help and possibly extinguish their desire to cooperate.

When we study screen time, essentially we’re using a model from the 1970s in order to measure it. We are asking people, either parents, or children, or teenagers: ‘Think back on the last day, the last month, the last year of your life – how much time did you spend on screens? Playing games, trying to find love, watching TV…’

Is growing up immersed in screens damaging our children?

One of the challenges of studying this area is how broad the parameters are: much of the research conflates all kinds of screen-based behaviour, from Zooming a friend, to posting on TikTok, to watching television. But the potential pitfalls of reading a digital book rather than a paper copy are clearly different from playing Fortnite. It’s also difficult to isolate the technology from wider societal phenomena: children who don’t get enough exercise may spend more time on screens, but that doesn’t make screens the main issue. Similarly, it is hard to separate common adolescent insecurities that have always existed from the social media platforms on which these anxieties are now played out.

They couldn’t go outside for years. Then Covid-19 trapped them again

hikikomori are young adults, mostly men, in their teens, 20s and 30s. They reside alone or, more often, stay holed up in a bedroom at their parents’ home. Because hiding from public view is their very motive, it’s hard to know exactly how many there are in South Korea, but the government estimates around 320,000. Some psychologists and former hikikomori, however, believe there may be many more that go unnoticed and unaccounted for. Some estimate the total is closer to 500,000. Others say over a million.

What If We Pay People to Stop Using Drugs?

Conventional addiction treatments tend to emphasize models of control—when yours truly was in treatment for an opioid addiction, I wasn’t allowed to drink fully caffeinated coffee or “fraternize” with patients who weren’t my same gender—treating people struggling with their drug use as if they can’t make healthy decisions for themselves. Contingency management rejects this outright.

Women Dominated Beer Brewing Until They Were Accused of Being Witches

Humans have been drinking beer for almost 7,000 years, and the original brewers were women. From the Vikings to the Egyptians, women brewed beer both for religious ceremonies and to make a practical, calorie-rich beverage for the home.

Explosions on film are made to look good: fireballs and flame. In reality, though, they’re a bit disappointing. Here’s how Hollywood does it.

It makes sense to focus on Germany when we talk about witches. Conditions for witch trials were, unfortunately, very good in large parts of the Holy Roman Empire. The country consisted of hundreds of principalities, and most of these could pass their own criminal laws. They had their own criminal courts, many staffed by incompetent lay judges who were nevertheless empowered to use torture. About half of all the people executed for witchcraft in the early modern period came from Germany.

Why Are So Many BASE Jumpers Dying?

Aside from the record fatality count, the BASE world hit another morbid milestone in August. The BASE Fatality List (BFL), an unofficial and non-comprehensive wiki that records BASE fatalities dating back to 1981 for educational purposes within the community, surpassed 300 names. The greater cause for concern, though, is that the BFL appears to be trending at an accelerated rate—more than 260 of those names have been recorded since 2000. 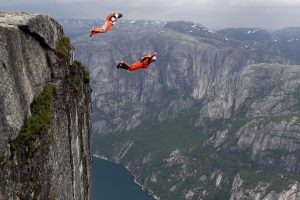